o A new pop up menu has been implemented onto Drag-Drop image box.

o Creation of mysterious a noisy pixel (shown as red) at the right bottom has been resolved.

This often happened when image was pasted and processed. 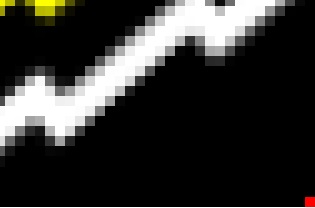 o Precise display of pixels in the zoom mode. In the past, half pixels were displayed in the edge.

Now, the software shows whole pixels correctly. See the difference in the below.

This correction also has been applied to resizing image.

o Interface of camera selection dialog box has been improved for tablet users.